Skip to content
Launch of SEAFUEL: the European project for sustainable integration of renewable fuels in local transportation

The official kick-off meeting of the SEAFUEL project was held in Galway, Ireland, on January 25th and 26th 2018.

With a total budget of 3,497,632,98€ and for 3 years, the SEAFUEL project aims to use the renewable resources across the Atlantic Area to power the local transport fleet and support the shift towards a low-carbon economy. The project will use the expertise and infrastructure of the partners in renewable energy, namely solar, wind and marine, to demonstrate the viability of hydrogen as a fuel to be used by the local transport authorities.

Among the first activities of the project was the celebration of the first transnational meeting of partners that took place on January 25th and 26th at the facilities of the National University of Ireland (NUI Galway), which leads the project. Since the beginning of the project in December 2017, the kick-off meeting provided the perfect opportunity for all partners to review the project objectives and the work plan, with a short overview on each project activity foreseen in phase 1. Furthermore, on January 26th a session was held with external experts from the Big Hit and GenComm projects, the second one funded by INTERREG NWE, with the intention of establishing communication bridges with other complementary hydrogen projects from the beginning of the project. 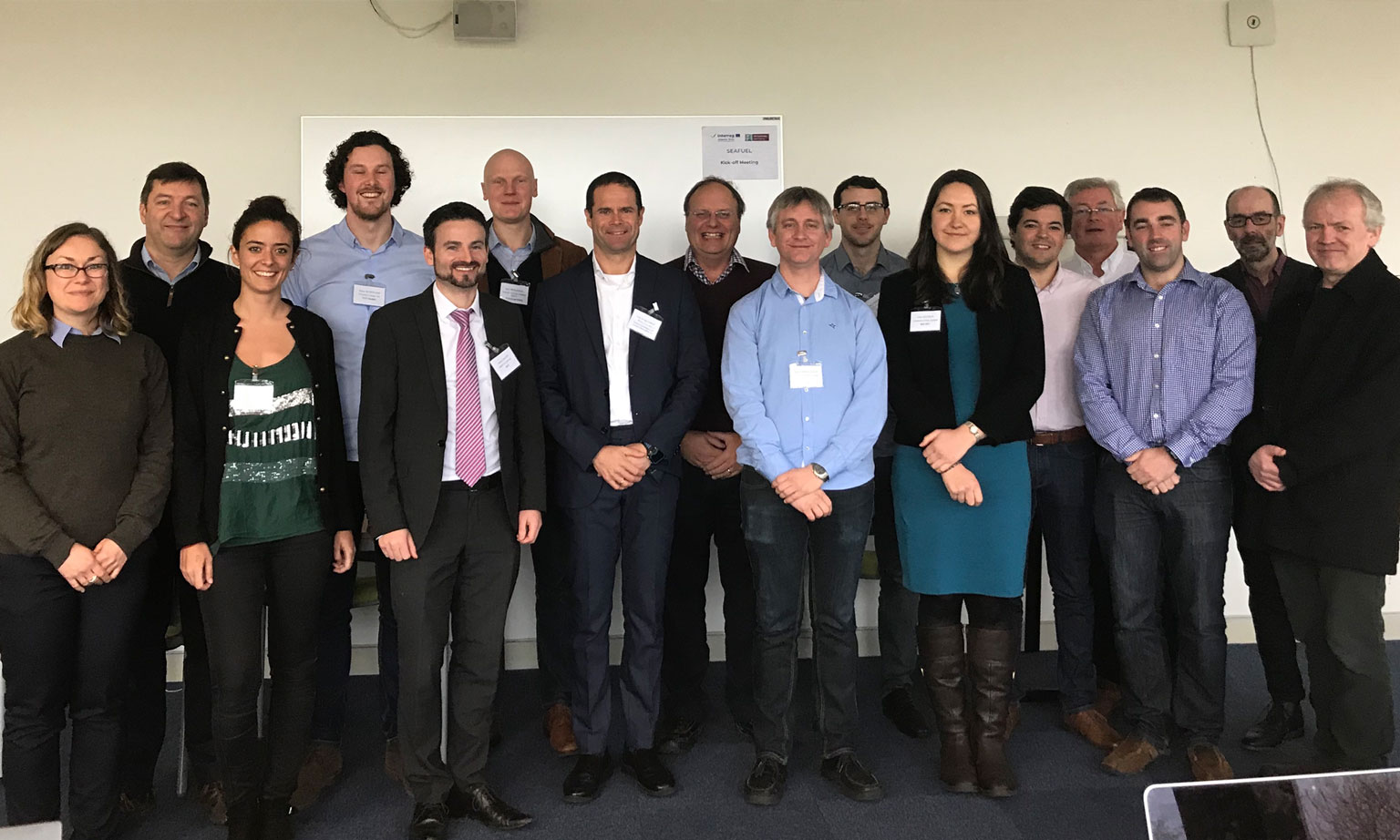 The aim of SEAFUEL is to demonstrate the feasibility to power local transportation networks using fuels produced by renewable energies and seawater, with no net carbon footprint as promoted by the resource-efficient flagship initiative COM(2010)2020. It will cover technical innovation by a demonstration plant, a framework for policy implementation and a sustainability analysis of production, distribution and usage of hydrogen as an alternative fuel in remote Atlantic regions. SEAFUEL proposes a sustainable way to power local transportation in isolated regions using renewable resources such as sun, wind and seawater.

SEAFUEL will focus on enhancing the green growth and blue economy and paving the grounds for common renewable energy policies to promote clean and sustainable transport systems. Isolated areas such as islands face the specific challenge of the high cost of electricity and fuel and their dependency on mainland infrastructures. SEAFUEL will target these regions where 30% of fuel consumption comes from local transportation. The project will drastically reduce greenhouse emissions, PM and NO2 in line with the Clean Air programme 2008/50/EC, and provide a pathway for isolated regions to become energetically independent, leading to future installations in the other Atlantic regions. An alternative fuels model for islands will be developed to fulfil the requirements of the Partners’ Regional Innovation Strategies (RIS3) aimed at low carbon economy and efficient use of marine resources.

The SEAFUEL project is co-financed by the 2014-2020 INTERREG Atlantic Area programme that supports transnational cooperation projects in 36 Atlantic regions of five countries: France, Ireland, Portugal, Spain and the United Kingdom, contributing to the achievement of economic, social and territorial cohesion. The partners of the project are: from Ireland, the National University of Ireland Galway and Comharchumann Fuinnimh Oileáin Árann Teoranta; from the United Kingdom, the University of Liverpool, Action Renewables, HyEnergy Consultancy Limited and Logan Energy; from Spain, the Institute of Technology and Renewable Energies of Tenerife and the Tenerife Energy Agency; The Regional Agency for Energy and Environment of the Autonomous Region of Madeira (Portugal) and the European Hydrogen Association (Belgium).